As many of you know, one of our art teachers, Mrs. Smaldino, has just welcomed a baby girl to her family. She was very surprised when she found out she was expecting another child. Mrs. Smaldino knew it was going to be a big change so she was a little nervous, but she was also very excited. She began dropping hints to her other children but they didn’t catch on, which led her to eventually tell them. Her kids were very surprised but excited to welcome a new sibling.

When asked how she felt when she found out she would be having a girl, it turns out there was no surprise there, at all. She said, “I laughed out loud when I found out she was a girl!” Her family has a lot of girls in it and her now second youngest, Mary, will have a little sister to play with. When it came to picking a name for her new daughter, she thought hard. She has always admired the name “Imogene,” so she did some research. She found out it was the most popular name in the 1920’s and decided it was time to bring it back! She also loves the nickname “Midge” for her.

Mrs. Smaldino and her family are thankful for their new addition and don’t plan on having any more. 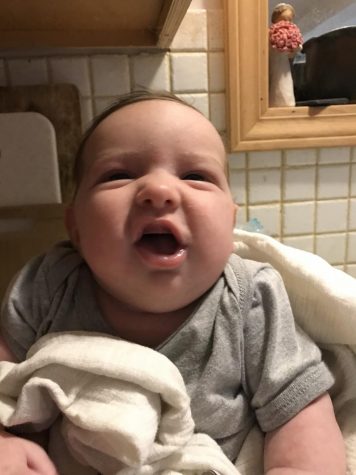