Clearing out the Smoke

Vaping has been a largely-discussed topic this year, both nationally and in our own community. E-cigarettes were invented for the market of people who are trying to quit tobacco smoking. However, the FDA reports 3.6 million kids under the age of 18 have tried an e-cigarette in 2018. In addition, over 40 deaths have been linked to vaping according to the CDC, not to mention there are over 2,000 lung injuries from it as well. President Trump has recently rescinded from a full ban on flavored vapes and plans to meet with pro-vaping advocates to solve this crisis.

“I think more regulation needs to be done to help stop getting kids into vaping,” suggests senior Matt Thomas. “The flavors and ads are grabbing the attention of younger audiences and getting them hooked, when they should really be focused on helping adults who smoke cigarettes quit.”

E-cigarettes and vaping has also been found to be harmful in ways that people hadn’t previously considered. Besides people getting second-hand smoke more likely than they would with a cigarette, lithium ion batteries in some of the more powerful e-cigs are very unsafe and can overheat causing burns and even explosions. The Washington Post reported a story on a 17-year old breaking his jaw from the lithium ion battery in his vape that exploded. This isn’t the only case of injury happening from the batteries.

Our very own physical education teacher, 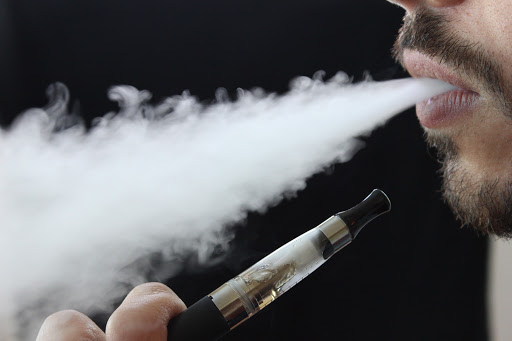 Mrs. Blasz commented on this issue saying, “When vaping first came out, the dangers were not really known and now that more research has been done to expose those dangers, I hope kids see them and stop. I think we can help solve this epidemic by teaching more in school about the effects and having stricter laws in place so these harmful products are out of our kids’ hands.”

Senator Chuck Schumer has recently proposed a flavored e-cigarette ban to help get these products out of kids hands. He said even if President Trump can not do it, Congress will work to pass legislation. Even big name companies like Apple have recently taken a stance against the vaping industry by banning vaping related apps. This, for sure, will be a long battle against the industry to get these dangerous products out of kids’ hands and make our communities more drug free.