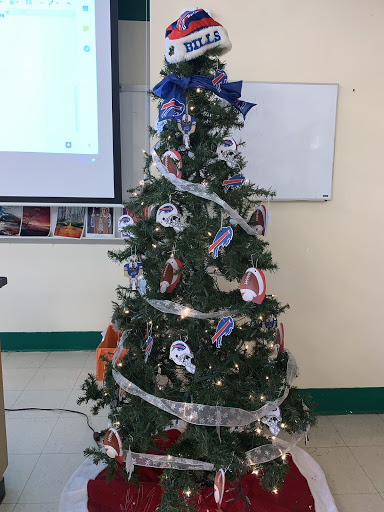 Andy Dalton and Tyler Boyd are no longer necessary for the Bills entering the playoffs.

Sunday night, the Buffalo Bills arrived in Pittsburgh at Heinz Field needing one win to clinch a playoff berth with a record of 9-4 going into the game.  Buffalo was looking to win to get a double digit winning season for the first time since 1999. Buffalo, on prime time, took care of business and handed Pittsburgh a 17-10 loss.  Their defense dominated like they have all season, led by the all-pro cornerback Tre’Davious White with 2 interceptions. A late touchdown in the 4th quarter from Josh Allen to Tyler Kroft put the Bills up 17-10.  Pittsburgh Steelers quarterback Delvin Hodges, an undrafted rookie, had no chance against this elite defensive unit.

The Buffalo faithful, known as Bills Mafia, have been awarded a playoff season for the 2nd time in the last 3 years, led by 3rd year coach Sean McDermott.  It took 17 years for the Buffalo Bills to break the drought, and now they are looking forward to another run of playoff football in January. Sean McDermott not only changed the culture in the locker room, but he has also developed a mentality where they expect to win.  McDermott and General Manager Brandon Beane told Bills Mafia to trust the process, and in 3 years this process they were talking about has seemed to work very well. Bills Mafia, after their big win over Pittsburgh, showed up to the airport to greet the team and applaud the way they played that night.  Not to mention, it was almost 3 AM, but that never stops these Bills fans. It’s a great time to be a Bills fan.

On Saturday, December 21st,  the Bills will be traveling to Foxborough to take on the New England Patriots in a game where the AFC east can still be won by Buffalo.  However, that is unlikely as the New England Patriots have to lose out, and their last game on their schedule is against the 3-11 Miami Dolphins. The Buffalo Bills have a chance to dethrone the Tom Brady Era in New England, and what better time to do it on national television against New England in Foxborough.  Beating New England wouldn’t guarantee them to win the AFC East, but it would put the league on notice heading into the playoffs.

Two other Bills fanatics claimed their excitement for the future of the team.

“I was at the game when they tore down the goal post [1988] and I’m looking forward to… not necessarily ‘destruction,’ but the fervor,” said Mrs. Baginski, English teacher here at Lake Shore.

“We have enormous potential and I’m excited to see what the team can do. I think Tom Brady is getting too old for the game and I would love to see him make an exit with all those rings, and to hopefully have the Bills earn one,” added Aidan Fitzgerald, Lake Shore senior.

Kickoff in Foxborough is at 4:30 on Saturday. Here’s hoping for an early Christmas present for Bills fans far and wide.