One final game is left in the landmark 100th year of the National Football League and millions of Americans will gather around their TVs to witness the historic Super Bowl LIV. The San Francisco 49ers will take on the Kansas City Chiefs, February 2 at Hard Rock Stadium in Florida.

Star quarterback Patrick Mahomes led an impressive performance on the field in the AFC Championship game against the underdog Tennessee Titans, crushing them in a 35-24 win. Mahomes threw for a whopping 294 yards and 3 touchdowns as well as taking one to end zone for himself. Ex-Buffalo Bills player Sammy Watkins received one touchdown while wide receiver Tyreek Hill received two. This will be the Chiefs’ first appearance in the Super Bowl in 50 years as they look to add another Super Bowl title to their franchise history. 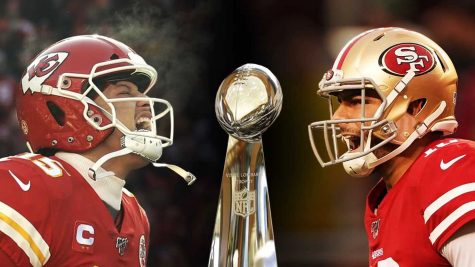 Lake Shore senior and Chiefs fan Aidan Fitzergarld believes they’ll win because, “Patrick Mahomes is going to be the deciding factor in this SuperBowl game.¨

The 49ers also led a dominant performance against the Green Bay Packers in a 37-20 win. Quarterback Jimmy Garapollo was silent most of the game, only throwing for 77 yards. Instead, powerhouse Raheem Mostert set a new record for the most rushing yards in a conference title game, garnering 220 yards and 4 touchdowns. Mostert also became the only player in NFL history with at least 200 rush yards and at least 4 rushing touchdowns in a playoff game. Defensively, the 49ers put up 3 sacks and 2 interceptions, with Richard Sherman and Emmanuel Moseley each getting one. The 49ers look to add a 6th Super Bowl to their franchise history, having only lost one final in 2014 against the Baltimore Ravens. 49ers fan, Brandon Allison says they will take home the Super Bowl championship title because, “The 49ers defense is the best in the league.¨

The Chiefs and 49ers will look to put up a clash of offensive masterclass Sunday. If you’re not really paying attention to the game and are just diving into the tons of food you might have at your friend’s party, just remember this, Go Bills!